Here are the cheapest airfare deals to Darwin. View Flights to Australia

Darwin International Airport (DRW), located in Marrara (Darwin's northern suburb) is the only airport that services the city. The airport sits 13 km (8.1 mi) from the center of Darwin, which is roughly a 15 minute drive. Darwin International Airport is serviced by Qantas, Virgin Australia, Singapore Airlines, Delta, Jetstar, and Philippine Airlines.

There are several ways to get to Darwin proper from the airport including car rental, shuttle bus, taxis, private cars and charter buses:

* Car rental counters for Avis, Budget, Europcar, Hertz and Thrifty can be found in the Arrivals hall, on the ground floor right next to baggage collection.
* The Darwin Airport Shuttle is available 24 hours a day. Reservations are recommended, but airport staff are happy to book reservations.
* Taxis can be hired from the taxi rank in front of the Terminal. Expect to pay between $25 and $30 for a ride into Darwin. You'll also need to pay and extra three dollars, as the airport charges and exit toll to any passenger leaving the taxi ranking lane.
* A rank for private cars can also be found in front of the Terminal. The same three dollar charge applies, but the trip price is negotiated between the driver and the passenger.
*Both private transportation buses operate out of the airport's Coach and Bus Parking Area at the eastern end of the terminal. The bus area includes transportation options from Darwin Charters and Shuttle, Buslink, Coach Charters Australia, Grand Touring Coaches and Greyhound Australia.


Darwin International Airport also offers several amenities to travelers. Showers can be found on the first floor at the top of the escalator. Lockers can be rented in the Pick-up Shelter in the Short Term Car Park area, which can be found right across from the terminal building. Long term parking can be purchased for $14.00 per day. The airport is currently undergoing an expansion, meaning that food options are limited to just a few restaurants (such as Hungry Jack's and Bumbu) at the moment.

What to do in Darwin

Darwin has recently become known as Australia's cross-section between the tropical and urban. Not only are there several natural wonders surrounding Darwin, but there are tons of things to do in the city, too.

From the waterfront you'll likely want to make your way to one of Darwin's Arts Precincts. Learn about aboriginal art and culture at the Museum and Art Gallery of the Northern Territory. The museum's permanent exhibitions include a gallery of indigenous art, an exhibit on the 1974 cyclone that decimated the city and Sweetheart, a preserved crocodile that was notorious for attacking aluminum dinghies.

Your choice of lodging in Darwin will largely be dependent on your budget. If you're looking to stay thrifty with your accommodations then you might consider a hostel, like Darwin Yha or the Dingo Moon Lodge. Both of these hostels will cost you little more than $30 per night, but as with any hostel experience it is important to remember that you are not always guaranteed private beds or bathrooms.

More traditional hotels are readily available, including the Vibe Hotel Darwin Waterfront, Darwin Central Hotel and Palms City Resort. These hotels will cost your anywhere between $155 and $300 per night, depending on the type of room you choose.

Darwin hosts numerous festivals and markets. The Mindil Beach Sunset Markets are held every Thursday and Sunday during the dry season (between April and October). The Darwin Festival is the 18-day annual celebration of the city's rebuilding after a cyclone in 1974 leveled the city. Territory Day (July 1) is the only time fireworks are allowed in Darwin, except for the Chinese New Year. 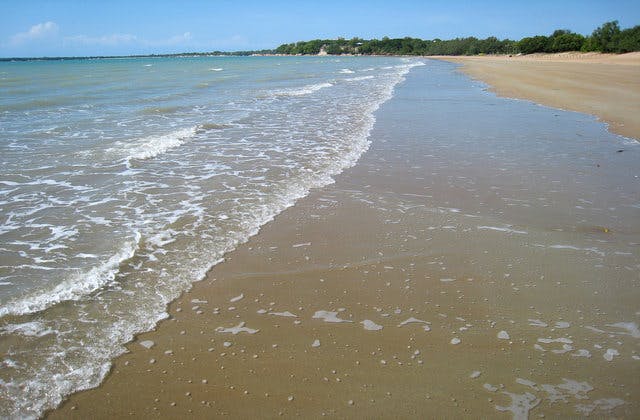 What airlines fly direct to Darwin from Lucknow?

No airlines have direct flights from Lucknow to Darwin.

What people are saying about Darwin right now:

Airlines that fly to Darwin :

Darwin (DRW) is serviced by: