Here are the cheapest airfare deals to Hobart. View Flights to Australia

As the capital of Tasmania, Hobart lays claim to the title of being one of the oldest cities in Australia. Founded in 1804, the city made a handy place to house prisoners until its temperate climate, natural bay and fertile soil made it a tempting location for new arrivals from Europe to call home. The city is framed by the sometimes snowy peaks of Mount Wellington and the sapphire-blue waters of the Tasman Sea. Visitors to this delightful city will enjoy all the modern conveniences and culture of a capital city while also using it as a base for exploring the other attractions the island of Tasmania has to offer.

Hobart International Airport handles air service from the mainland, as well as accommodating the occasional international flight from major airlines such as Qantas and Virgin Australia. The single-runway airport is just 15 kilometres from the city center in nearby Cambridge and boasts a conjoined international and domestic terminal for all incoming and outgoing flights. Passenger services in the terminal include cafes, restaurants, shops and a hotel.

An airport shuttle service, Redline, offers one-way or round-trip tickets for passengers wishing to travel to Hobart. Taxis are available to make the drive into Hobart, typically charging double what the airport shuttle service asks. There are also car hire facilities at the airport able to accommodate those wishing to rent a car for the duration of their stay. For those that don't mind the walk, a bus station is located five kilometres from the airport that offers several lines traveling into Hobart.

Hobart has a population of 250,000 and offers visitors the full range of tourist infrastructure, from hotels to restaurants to ample cultural experiences. For those who wish to enjoy an idyllic echo of the city's prosperous days as a major trading port, the Salamanca Market showcases a Saturday extravaganza of artisanal crafts and art, all housed in 1800s-era sandstone warehouses. Behind the market lies Battery Point, a maze of buildings fun to wander through as they showcase the Victorian architecture characteristic of the city's founding.

The city also houses several museums dedicated to its past and the culture of Tasmania's indigenous people. In the Tasmanian Museum and Art Gallery, visitors will find many things to pique their interest, from the vast coin collection to items of artistic expression to stuffed examples of the extinct Tasmanian Tiger. Nearly 20 minutes' walk from the city center are the Botanical Gardens, notable for their collections of plants native to Tasmania and their subarctic gardens housed in special buildings maintaining a low temperature.

For those with a sweet tooth, a visit to Cadbury's Chocolate Factory gives a tour and lecture on candy making while offering a shop on the premises to purchase their wares. Cascade Brewery offers tours of its facilities, in addition to offering visitors a chance to sample a variety of brews. Hobart also boasts a handful of wineries that thrive in the island's tranquil climate to offer memorable pinot noirs and rieslings. For more substantial fare, Hobart restaurants often take full advantage of the seaside location to offer customers delicious seafood native to the area, such as Tasmanian lobsters or deep-sea Trevalla.

Depending on the time of year, Hobart offers much in the way of festivals and events. The Sydney to Hobart Yacht Race is a yearly phenomenon held on Boxing Day. In April the city features a tulip festival at the botanical gardens. The city also offers football, rugby and cricket matches to attend and the Australian Hockey League holds events for both men's and women's teams.

A fun way to view the city in its entirety is from the water. Peppermint Bay Cruises offers visitors several hours aboard a yacht that showcases oceanic wonders and geological features before stopping for a seafood lunch. Enterprising visitors can also hike the heights of Mount Wellington for the breathtaking views of Hobart spread out below and a clear view of the vastness of the ocean beyond. 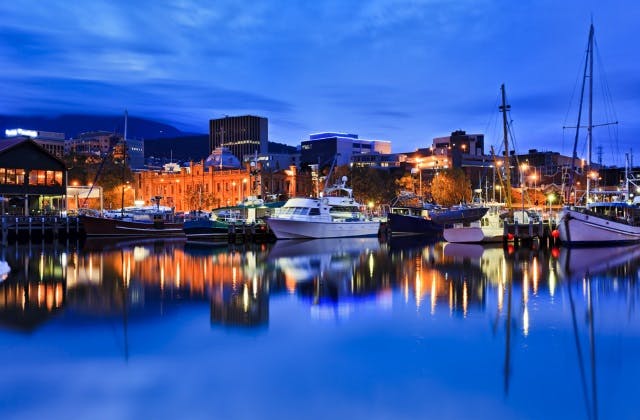 What airlines fly direct to Hobart from Memphis?

No airlines fly non-stop between Memphis and Hobart.

What people are saying about Hobart right now:

Airlines that fly to Hobart :

Hobart (HBA) is serviced by: